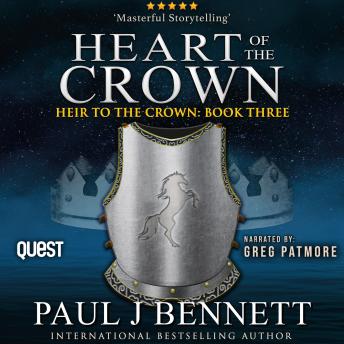 Heart of the Crown: Heir to the Crown Book 3

For as long as he can remember, Alric dreamed of being a hero; of defeating a dragon and saving the princess, but his royal position would never allow it, until...

The arrival of the Mercerian Emissaries demands a princely escort, and being neither the heir, nor the spare, he is the perfect choice.

Used to a lifetime of comfort and ease, he expects this duty to be as tiresome as all the others. His tranquil life is upended from the beginning, as havoc seems to follow these dignitaries everywhere, causing him all sorts of grief.

From fighting unknown creatures to defending the life of a royal, he discovers that becoming a hero is much more dangerous than he ever imagined. No matter what the outcome, his life will never be the same.

Heart of the Crown is audiobook three in the Heir to the Crown series. If you like dramatic fight scenes, compelling characters and a captivating story, then you will love Paul J Bennett's tale of a prince who desires greatness.

Heart of the Crown: Heir to the Crown Book 3

This title is due for release on May 23, 2019
We'll send you an email as soon as it is available!