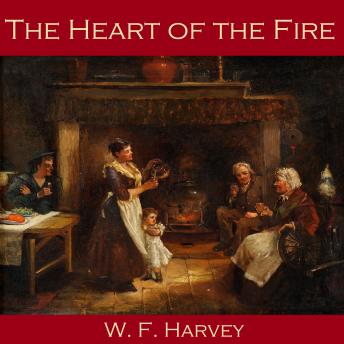 The Heart of the Fire

William Fryer Harvey (1885-1937) was an English writer of short stories, most notably in the mystery and horror genres.

"The Heart of the Fire" is a queer tale. On the fireplace in the old coaching inn, The Moorcock, there is carved an old mysterious prophecy which casts an odd burden on the family... in that they dare not ever let the fire go out. One night a stranger appears at the door. He does not stay long and appears afraid of staying in the house after he has sat by the fire for a while. He mentions that he always sees his future in the embers. He sets off into the night, but after a few hours returns, injured, having been thrown from his horse. As the landlord sits with him by the fire, the stranger nods off to sleep. The landlord seems to hear a strange voice calling him from the flames and urging him to commit a terrible...awful... unconscionable crime.

His action determines the events of the next seventy years.