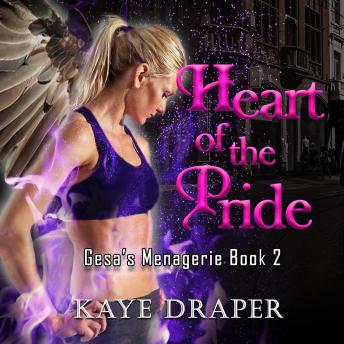 Heart of the Pride

When Gesa escaped her oppressive clan to become a bounty hunter in a growing backwater city, she never imagined she would end up dating a fae. She might try her best to deny Oisin’s jokes about her starting a pride—a harem reserved for male gryphons—but Gesa is growing dangerously fond of their roommate and secretary, the unassuming human, Con.

But romantic issues are the least of Gesa’s worries. Her ancient, deadly fae lover is hiding something. And a spate of animal killings leads the amateur detectives right to a murderer who hides in the open, sure of his supremacy over those he hunts. When Gesa and Oisin are wounded and nearly killed, Con has no choice to take matters into his own hands to protect the pride, putting the breakable—and idiotically reckless—human right in the way of a killer.

I was tired of reading the same old thing over and over again in reverse harem. Sick of all alpha male and fainting female all the time—and desperate to be able to tell the male characters apart—I tried to infuse some variety into my story. Gesa might not be your cup of tea, and that’s okay—she doesn’t care. Her lovers are as varied in physicality and personality as they are in supernatural race. And the characters all have their own definition of sexuality. I know reverse harem is all about the fantasy, and my fantasy is a bit outside the norm. You’ve been warned.

*This is a series. There will be unresolved plot threads at times/ occasional cliff hangers.

Heart of the Pride