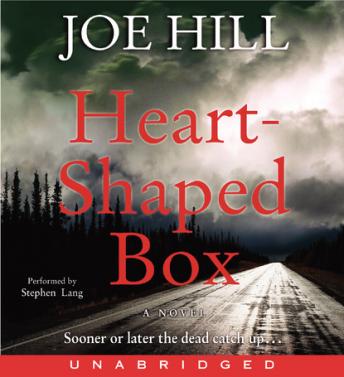 The publication of Joe Hill’s beautifully textured, deliciously scary debut novel Heart-Shaped Box was greeted with the sort of overwhelming critical acclaim that is rare for a work of skin-crawling supernatural terror. It was cited as a Best Book of the Year by Atlanta magazine, the Tampa Tribune, the St. Louis Post Dispatch, and the Village Voice, to name but a few. Award-winning, #1 New York Times bestselling Neil Gaiman of The Sandman, The Graveyard Book, and Anansi Boys fame calls Joe Hill’s story of a jaded rock star haunted by a ghost he purchased on the internet, “relentless, gripping, powerful.” Open this Heart-Shaped Box from two-time Bram Stoker Award-winner Hill if you dare and see what all the well-deserved hoopla is about.

Great story from a wonderful author. Enjoyed the narration and hope to find another collaboration between the two of them.

I loved it! I love the narrator, I loved the story, easy to follow and really cool. I fell in love with the characters, and the end was perfect... absolutely did not want the story to end..

I really liked this book. I was a bit apprehensive at first and then it had me hooked. The author did a great job of keeping theses characters interesting. The narrator did great as well. I would definitely recommend this book.

Ah it was an ok story... I doubt I would have bought it if I knew. The narrator was AMAZING which made the book easier to get through.