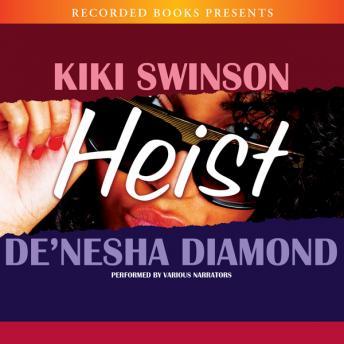 The Ultimate Heist Kiki Swinson Accustomed to a life of luxury, Shannon Marshall is devastated to lose everything after her husband, Todd, is sent to prison for gun running. So when Todd plans the ultimate stickup from behind bars, Shannon's ready to put her neck on the line. But she'll have to pull off the hustle of a lifetime and play one dangerous gangster who always gets what he wants. . . Robyn Banks De'Nesha Diamond DEA Agent Jordan Hayes has vowed to never walk in her ex-con father's footsteps. Suspecting her father is planning another robbery, she begins keeping close tabs on him and his crony--sexy gangster Keston Bishop. Jordan soon becomes addicted to the danger that radiates from Keston like street candy as she takes part in a daring theft that could cost her everything... 'Kiki captures the heat of the streets.' --Wahida Clark 'Diamond tells it like it is.' --Publishers Weekly on Heartbreaker

This title is due for release on January 7, 2011
We'll send you an email as soon as it is available!