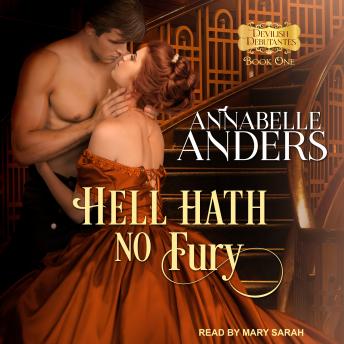 Miss Cecily Findlay practices proper etiquette, dances the waltz flawlessly, wears clothes of the latest fashion, and is a beauty in her own right. Even so, she'd never be received by the ton if not for her enormous dowry . . . which has attracted Flavion Nottingham, a spoiled and entitled earl. This so-called gentleman has beggared his estate and sees Cecily as the answer to all his problems. Most dastardly of all, he doesn't care if he shatters her dreams while executing his devious scheme.

Mr. Stephen Nottingham, successful industrialist, is back in England to save his cousin's (ahem) assets but may have arrived too late. The clean-up involves settling massive debts, dismissing a clinging mistress, and dealing with more than one irate papa. None of that matters, however, as much as saving the beautiful Cecily.

Cecily is trapped by Lord Kensington and Stephen is trapped by his honor. Happily ever after hangs in the balance. Will fate open the doors for their enduring love?

I really enjoyed the book, but not really the narrator. I've got used to her, but some things really bothered me: when she ended sentences in a whisper/lowering her voice. Maybe it was intended to sound mysterious. Every chapter number was announced with somewhat of a happy tone/ more animated.

Cecily, the daughter of a self made merchant, has just become a Countess and it was a love match to boot - or so she thought. As it turns out, the Earl married her not for love but her one hundred thousand pound dowry, and is not only engaging in affairs but openly flaunting it. Not at all pleased by this, Cecily and her friends of plans to get her freedom from idle plots of killing him to more reasonable ones than to seduce another man while denying her husband. Enter Stephen, the Earl's cousin. This book is everything a historical romance should be with strong characters you can either call in love with or love to hate, an interesting plot with a bit of mystery and enough twists to make it interesting, and just enough steamy scenes.