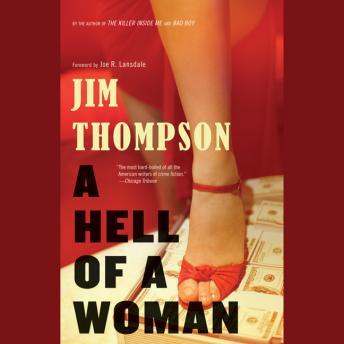 A Hell of a Woman

Frank 'Dolly' Dillon has a job he hates, working sales and collections for Pay-E-Zee Stores, a wife named Joyce he can't stand, and an account balance that barely allows him to pay the bills each month. Working door-to-door one day, trying to eke money out of folk with even less of it than he has, Dolly crosses paths with a beautiful young woman named Mona Farrell. Mona's being forced by her aunt to do things she doesn't like, with men she doesn't know -- she wants out, any way she can get it. And to a man who wants nothing of what he has, Mona sure looks like something he actually does.

Soon Dolly and Mona find themselves involved in a scheme of robbery, murder and mayhem that makes Dolly's blood run cold. As Dolly's plans begin to unravel, his mind soon follows.

In A Hell of a Woman, Jim Thompson offers another arresting portrait of a deviant mind, in an ambitious crime novel that ranks among his best work.

Hell of a Woman