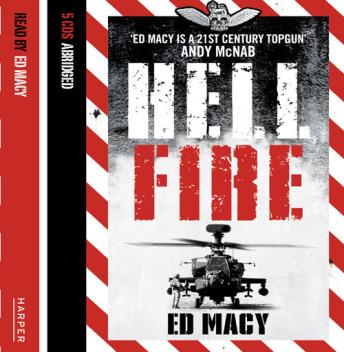 Climb back inside the cockpit of the world’s deadliest helicopter and learn how one mission helped change the course of the Afghan conflict and rewrite the rules of combat.


May 2006. Pilot Ed Macy arrives in Afghanistan with a contingent of Apache AH Mk1. It’s the first operational tour for the deadly, difficult machines and confidence in the cripplingly expensive attack helicopter is low. It doesn’t help that for their first month ‘in action’, Ed and his mates see little more than the back-end of a Chinook.


But when the men of 3 Para get pinned down during Op Mutay, the Army’s reservations about their fearsome new fliers are thrown out the window. In the blistering firefight that follows, Ed fires the first ever Hellfire missile and, with one squeeze of the trigger, changes the war in Afghanistan forever. What had been looking like a £4.2 billion mistake quickly becomes the British Army’s greatest asset, as the awe-inspiring Apache is dramatically redirected to fight the enemy head on.


In this gripping account of war on the ground and in the skies above the dusty wastes of Helmand, Ed recounts the intense months that followed: the steep learning curve, the relentless missions, the evolving enemy and the changing Rules of Engagement. As he comes to grip with the Apache, his early career as a paratrooper stands him in good stead, as does his operational baptism as a pilot. Both shaped his ability to fly, fight and survive during that fateful first Afghanistan tour against a cunning and ruthless enemy.


Ed will need every ounce of willpower and skill to succeed over the long, hot Helmand summer, as he and his colleagues find themselves on trial for their lives and for the reputation of a machine on which the British government had staked a fortune. The crucible of fire that awaited them would cement the fate of man and machine forever.