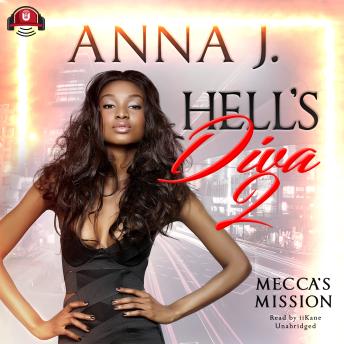 The riveting Hell’s Diva series continues as Mecca Skyes returns to take her revenge on the only person she ever thought she could trust.
Beautiful Mecca was only a kid when her parents were killed, and she was saved from the rough streets of Brooklyn when her aunt Ruby, the “Godmother of Crime,” took her in. Ruby rubbed out the goons that murdered Mecca’s parents and everything seemed fine—until Ruby betrayed Mecca by sleeping with her man, setting in motion a series of events that nearly left Mecca dead from a gunshot wound.
Now Mecca’s all healed, but her heart is cold, and she won’t rest until she brings Ruby down. But things may not turn out the way Mecca thinks they will …