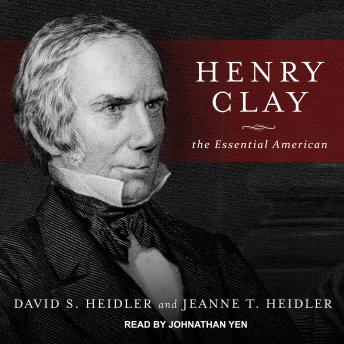 He was the Great Compromiser, a canny and colorful legislator whose life mirrors the story of America from its founding until the eve of the Civil War. Speaker of the House, senator, secretary of state, five-time presidential candidate, and idol to the young Abraham Lincoln, Henry Clay is captured in full at last in this rich and sweeping biography.

David S. Heidler and Jeanne T. Heidler present Clay in his early years as a precocious, witty, and optimistic Virginia farm boy who at the age of twenty transformed himself into an attorney. The authors reveal Clay's tumultuous career in Washington, including his participation in the deadlocked election of 1824 that haunted him for the rest of his career, and shine new light on Clay's marriage to plain, wealthy Lucretia Hart, a union that lasted fifty-three years and produced eleven children.

Featuring an inimitable supporting cast including Thomas Jefferson, James Madison, and Abraham Lincoln, Henry Clay is beautifully written and replete with fresh anecdotes and insights. Horse trader and risk taker, arm twister and joke teller, Henry Clay was the consummate politician who gave ground, made deals, and changed the lives of millions.