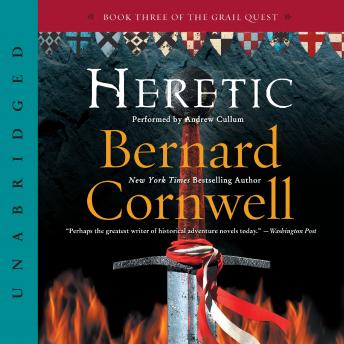 From New York Times bestselling author Bernard Cornwell, the sequel to The Archer’s Tale and Vagabond—the spellbinding tale of a young man, a fearless archer, who sets out wanting to avenge his family’s honor and winds up on a quest for the Holy Grail.

Already a seasoned veteran of King Edward's army, young Thomas of Hookton possesses the fearlessness of a born leader and an uncanny prowess with the longbow. Now, at the head of a small but able band of soldiers, he has been dispatched to capture the castle of Astarac. But more than duty to his liege has brought him to Gascony, home of his forebears and the hated black knight who brutally slew Thomas's father. It is also the last place where the Holy Grail was reported seen. Here, also, a beautiful and innocent, if not pious, woman is to be burned as a heretic. Saving the lady, Genevieve, from her dread fate will brand Thomas an infidel, forcing them to flee together across a landscape of blood and fire. And what looms ahead is a battle to the death that could ultimately shape the future of Christendom.