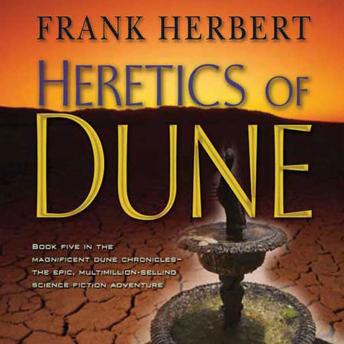 Heretics of Dune: Book Five in the Dune Chronicles

Heretics of Dune, the fifth installment in Frank Herbert's classic sci-fi series.
On Arrakis, now called Rakis, known to legend as Dune, ten times ten centuries have passed. The planet is becoming desert again. The Lost Ones are returning home from the far reaches of space. The great sandworms are dying, and the Bene Gesserit and the Bene Tleilax struggle to direct the future of Dune. The children of Dune's children awaken as from a dream, wielding the new power of a heresy called love.

Heretics of Dune: Book Five in the Dune Chronicles