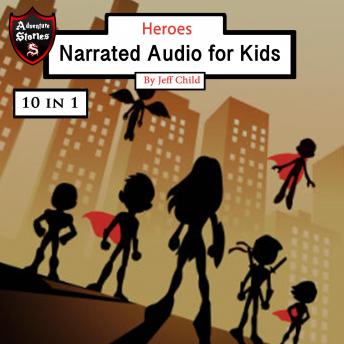 In this fun, engaging bundle of kids’ stories with heroic characters, you can find themes in the following short-listens:


1 A diary of an anti-hero, a person who got bullied and is a puzzle genius who designs pyramids.

2 A spy who is torn between the rivalry of two regions.

3 A legend, told by an old geezer, who relates the story of a young hero with a magic sword, defeating skeletons and zombies.

4 A story about gangsters, one of them having a conscience.

5 The diary of another gangster who falls in love and tries to blend in and stand out at the same time.

6 A fantasy story with orcs and elves.

7 Secrets, keys, and mazes adorn the mystery of this fantasy story.

8 Young heroes stuck in a maze with exploding monsters.

9 The fun account of an ocelot who befriends a young girl and prevents a disaster.

10 The awesome diary of a cold-blooded zombie-slayer who finds a job at what he’s good at.