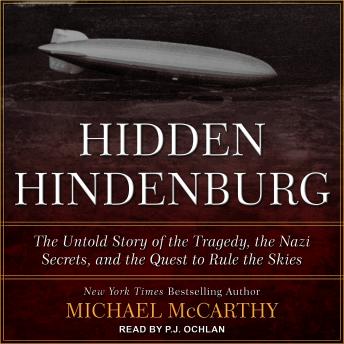 The Hidden Hindenburg: The Untold Story of the Tragedy, the Nazi Secrets, and the Quest to Rule the Skies

By the author of Ashes Under Water, here is one of the great untold stories of World War II. The Hidden Hindenburg at last reveals the cause of aviation's most famous disaster and the duplicity that kept the truth from coming to light for three generations. It also finally catches up with a German legend who misled the world about the Hindenburg to bury his own Nazi connections.

Drawing on previously unpublished documents from the National Archives in Washington, along with archival collections in Germany, this definitive account explores how the Hindenburg was connected to the Dachau concentration camp, a futuristic German rocket that terrified the Allies, and a classified project that imported Nazi scientists to America after the war.

It took author Michael McCarthy four years to get to the bottom of this epic disaster, in which the largest object civilization has ever managed to fly burnt up in less than one minute. Along the way, he found a tale of international intrigue, revealing a whistleblower, a cover-up, and corruption on two continents.

Hidden Hindenburg: The Untold Story of the Tragedy, the Nazi Secrets, and the Quest to Rule the Skies