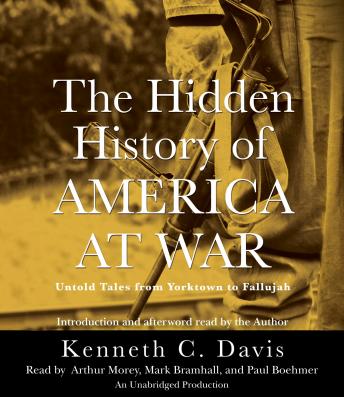 The Hidden History of America at War: Untold Tales from Yorktown to Fallujah

Multi-million-copy bestselling historian Kenneth C. Davis sets his sights on war stories in The Hidden History of America at War. In prose that will remind you of 'the best teacher you ever had' (People Magazine), Davis brings to life six emblematic battles, revealing untold tales that span our nation's history, from the Revolutionary War to Iraq. Along the way, he illuminates why we go to war, who fights, the grunt's-eye view of combat, and how these conflicts reshaped our military and national identity.

From the Battle of Yorktown (1781), where a fledgling America learned hard lessons about what kind of military it would need to survive, to Fallujah (2004), which epitomized the dawn of the privatization of war, The Hidden History of America at War takes listeners inside the battlefield, introducing them to key characters and events that will shatter myths, misconceptions, and romanticism, replacing them with rich insight.

Hidden History of America at War: Untold Tales from Yorktown to Fallujah