The Hidden Meaning of The Lord of the Rings: The Theological Vision of Tolkien's Fiction 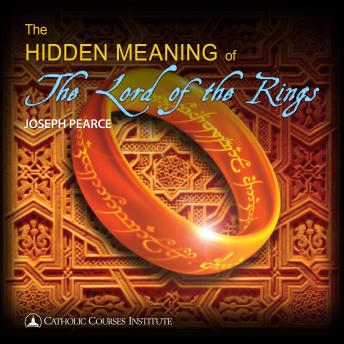 Join Joseph Pearce as he explores the great theological depth of the most popular work of literature in the twentieth century, J.R.R. Tolkien’s The Lord of the Rings. Despite the absence of any direct mention of Christ or the Catholic Church, Tolkien described his work as 'fundamentally religious and Catholic.' He was able to infuse his fictional world with theological orthodoxy through his creation of myth and a world order. Endowing his protagonists with Christian virtues, he also incorporated themes of grace and mercy.

Tolkien's deep faith and creative philosophy emerge from the narrative as an unmistakable Catholic presence. The very foundation of Tolkien's Middle-earth, from its creation by Iluvatar, the one God, to angel-like Melkor's sinful rebellion, to the menacing presence of Sauron, the dark lord, supports Professor Pearce's argument for the Catholicity of the work. You'll learn of the symbolic greatness of the One Ring, understand the significance of Tolkien’s choice of dates, notice the rich similarities between the Elvish waybread, lembas, and the Catholic Eucharist, and see how Frodo, Aragorn, and Gandalf act as Christ-figures.

Over the eight lectures in the course, Professor Pearce highlights connections, symbols, and insights which will expand your reading of The Lord of the Rings. It is said that art holds the mirror up to life. This is the reason that art is 'real' and fiction is 'true.' The Lord of the Rings has continued to endure as a masterpiece of literary genius because it puts human nature on display, revealing both man’s greatest temptations, and his most glorious victories. Learn more and discover the wisdom of The Lord of the Rings with Professor Joseph Pearce.

Hidden Meaning of The Lord of the Rings: The Theological Vision of Tolkien's Fiction