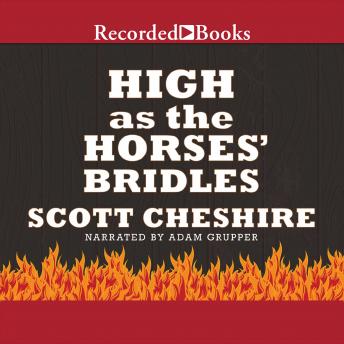 High as the Horses' Bridles

Josiah is a child preacher, called to speak to an amphitheater of thousands in 1980s New York. In a style reminiscent of DeLillo, Cheshire takes us inside their apocalypse-obsessed world, setting the tone for events to come. Fast forward several years, and Josiah (or Josie) has broken with the community that bound him, only to have the new life he built collapse. When his ex-wife Sarah calls to say his father sounds strange--even unhinged--Josie must return home. Back in Queens, the old sights and sounds of the neighborhood and the memories-- of his childhood friend Issy, his first love, the mother he has yet to mourn-- overcome him. When he arrives at his father' s door, he' s completely unprepared for what he finds. How far back must one man journey to heal a sacred bond between father and son? In a surprising twist, we learn that it may be further than even Josie himself. In rhapsodic language steeped in the tradition of evangelism, Scott Cheshire has created a novel that is remarkable in scale and energized by the power and danger of belief. High as the Horses' Bridles is the debut of an extraordinary new talent.

High as the Horses' Bridles