The High-Beta Rich: How the Manic Wealthy Will Take Us to the Next Boom, Bubble, and Bust 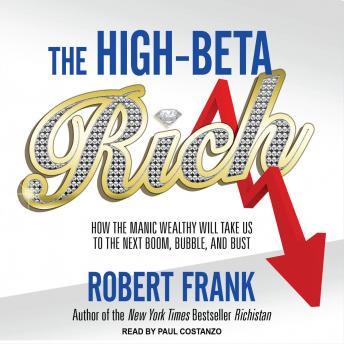 The rich are not only getting richer, they are becoming more dangerous. Starting in the early 1980s the top one percent broke away from the rest of us to become the most unstable force in the economy. An elite that had once been the flat line on the American income charts-models of financial propriety-suddenly set off on a wild ride of economic binges.
Not only do they control more than a third of the country's wealth, their increasing vulnerability to the booms and busts of the stock market wreak havoc on our consumer economy, financial markets, communities, employment opportunities, and government finances.Robert Frank's insightful analysis provides the disturbing big picture of high-beta wealth. His vivid storytelling brings you inside the mortgaged mansions, blown-up balance sheets, repossessed Bentleys and Gulfstreams, and wrecked lives and relationships:
How one couple frittered away a fortune trying to build America's biggest house-90,000 square feet with 23 full bathrooms, a 6,000 square foot master suite with a bed on a rotating platform-only to be forced to put it on the market because 'we really need the money'.Repo men who are now the scavengers of the wealthy, picking up private jets, helicopters, yachts and racehorses-the shiny remains of a decade of conspicuous consumption financed with debt, asset bubbles, 'liquidity events,' and soaring stock prices.How 'big money ruins everything' for communities such as Aspen, Colorado whose over-reliance on the rich created a stratified social scene of velvet ropes and A-lists and crises in employment opportunities, housing, and tax revenues.
Why California's worst budget crisis in history is due in large part to reliance on the volatile incomes of the state's tech tycoons.The bitter divorce of a couple who just a few years ago made the Forbes 400 list of the richest people, the firing of their enormous household staff of 110, and how one former spouse learned the marvels of shopping at Marshalls, filling your own gas tank, and flying commercial.
Robert Frank's stories and analysis brilliantly show that the emergence of the high-beta rich is not just a high-class problem for the rich. High-beta wealth has national consequences: America's dependence on the rich + great volatility among the rich = a more volatile America. Cycles of wealth are now much faster and more extreme. The rich are a new 'Potemkin Plutocracy' and the important lessons and consequences are brought to light of day in this engrossing book.

High-Beta Rich: How the Manic Wealthy Will Take Us to the Next Boom, Bubble, and Bust