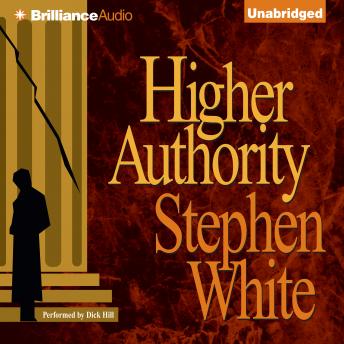 The sudden death of Utah's Senator Orrin Hatch propels his successor, Lester Horner, first into Hatch's Senate seat and then on to become the first Mormon associate justice of the U.S. Supreme Court. Carried along with Horner is Blythe Oaks, an ambitious and intelligent woman who is also Horner's favorite law clerk and fellow Mormon. But Blythe's reputation - and, by extension, Lester Horner's - is threatened when a female former employee accuses her of sexual harassment and career sabotage. In Higher Authority White shifts his focus from Dr. Alan Gregory, the hero of Privileged Information and the national bestseller Private Practices, to Alan's fiancée, Lauren Crowder. The pool-shooting deputy D.A.'s life is already complicated enough as she picks her way through her relationship with Alan at the same time she is fighting her quiet and dignified battle with multiple sclerosis. But since Blythe's accuser happens to be Lauren's kid sister, aspiring stand-up comic Teresa Crowder, Lauren plunges into the case. And she gets immediate help from an old law school buddy, Robin Torr, whose practice is in Salt Lake City. When, suddenly, Blythe Oaks is savagely murdered in Washington D.C., the lengths to which someone will go to protect secrets that might prove embarrassing to higher authorities in the church are starkly revealed. And as Crowder and Torr probe more and more deeply into these secrets, with timely help from Alan Gregory and his old friend Detective Sam Purdy of the Boulder, Colorado police, White's tough but determined women find the body count growing and themselves placed in jeopardy by a remorseless killer.