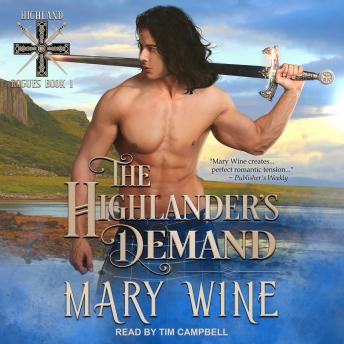 Buchanan Mackenzie is a new laird, and he's about to be tested. When his half-brother is killed, he must seek vengeance or face the rage of his clansmen. Beyond spilling blood, fate offers him another solution. Taking the daughter of his enemy will appease his angry men, but it leaves him struggling to find peace over making a hostage of a woman. What sort of man settles his disputes with a helpless woman?

Rhedyn Lindsey has been raised to shoulder her duty. For her kin and clan, she will make the best of a future that will be decided based on alliances. But she never expects it to come in the form of being taken as a hostage. In an instant, her life is turned inside out. Perhaps for the best, though, for the alternative would have been to see her father's blood spilled. Now she's at the mercy of a man who has every reason to hate her. Regardless of what fate throws her way, she won't crumble. She'll stand up to Buchanan Mackenzie. Just because she's a woman, doesn't mean she lacks courage.

Will Buchanan Mackenzie give in to the demands of his men who seek revenge for the death of his half-brother, or will he rely on the wisdom his beloved father taught him, and take his time in deciding what will happen to his beautiful captive-Rhedyn Lindsey-a woman who has captured his attention, respect, and quite possibly his heart?