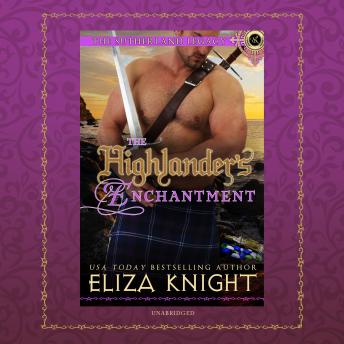 From the bestselling author of the Stolen Bride Series comes a brand new and exciting family saga! For fans of Scottish historical romance, the Sutherland Legacy propels you into the Highlands with tales of daring adventure, irresistible heroes and passion!
Lady Blair Sutherland has always followed the rules. As the youngest of five, she's spent years observing her older siblings misbehaving-but even more importantly, she's learned a lot about smoothing over disputes. On a playful dare with her cousins, Blair writes a fictitious note and puts it in a bottle but, at the last minute, refuses to follow through and toss it out to sea. As the months pass, she forgets about what she's written until a warrior lays siege to her clan's castle-in her name-claiming her brother is a murderer. For a lass who's never been in trouble-her world is about to turn itself inside out.
Laird Edan Rose has been looking for a way to prove himself to his clan after the murder of his older brother. When he was a lad, his father sent him to foster with Robert the Bruce, but never asked him to return home. Gone all these years serving his king, he has to make his mark and show his clan he has what it takes to lead by finding his brother's killer. When the answer to his troubles arrives as a message in a bottle, he wastes no time in taking action. Though he hopes the man responsible for his clan's pain will surrender, Edan is not afraid to wage war. If he has to, he'll lay siege to the castle, rescue the lass, and take out his enemies to gain the respect he seeks.
When a Highlander rides on her brother's castle, Blair knows the blame lies at her feet. If the only way to clear the family name is by giving herself up to a stranger and helping him find the true assassin-certainly not her brother-then so be it. But once she's in Edan's arms, the only thing on her mind is wondering whether his kiss is as powerful as his embrace. And as for Edan, he's now just as determined to prove himself worthy of Blair's heart as he was to show his worth to his clan. The one who wanted Edan's brother dead puts an end to their newfound passion, however, when he decides the two of them are an even loftier prize.