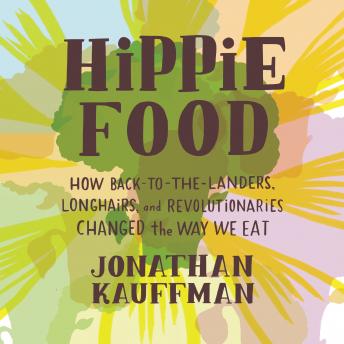 Hippie Food: How Back-to-the-Landers, Longhairs, and Revolutionaries Changed the Way We Eat

An enlightening narrative history—an entertaining fusion of Tom Wolfe and Michael Pollan—that traces the colorful origins of once unconventional foods and the diverse fringe movements, charismatic gurus, and counterculture elements that brought them to the mainstream and created a distinctly American cuisine.

Food writer Jonathan Kauffman journeys back more than half a century—to the 1960s and 1970s—to tell the story of how a coterie of unusual men and women embraced an alternative lifestyle that would ultimately change how modern Americans eat. Impeccably researched, Hippie Food chronicles how the longhairs, revolutionaries, and back-to-the-landers rejected the square establishment of President Richard Nixon’s America and turned to a more idealistic and wholesome communal way of life and food.

From the mystical rock-and-roll cult known as the Source Family and its legendary vegetarian restaurant in Hollywood to the Diggers’ brown bread in the Summer of Love to the rise of the co-op and the origins of the organic food craze, Kauffman reveals how today’s quotidian whole-foods staples—including sprouts, tofu, yogurt, brown rice, and whole-grain bread—were introduced and eventually became part of our diets. From coast to coast, through Oregon, Texas, Tennessee, Minnesota, Michigan, Massachusetts, and Vermont, Kauffman tracks hippie food’s journey from niche oddity to a cuisine that hit every corner of this country.

A slick mix of gonzo playfulness, evocative detail, skillful pacing, and elegant writing, Hippie Food is a lively, engaging, and informative read that deepens our understanding of our culture and our lives today.

Hippie Food: How Back-to-the-Landers, Longhairs, and Revolutionaries Changed the Way We Eat