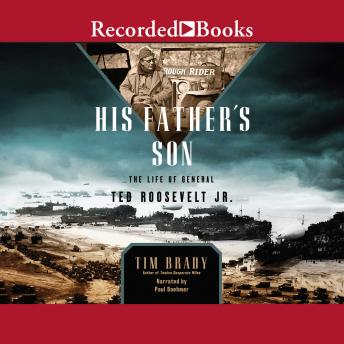 His Father's Son: The Life of General Ted Roosevelt, Jr.

The story of Theodore Roosevelt, Jr., a fortunate son who proved himself on the battlefields of two world wars. General Omar Bradley said of him, 'I have never known a braver man or a more devoted soldier.' But for much of his life, Theodore Roosevelt's son Ted seemed born to live in his father's shadow. With the same wide smile, winning charm, and vigorous demeanor, Ted possessed limitless potential, with even the White House within his reach. In the First World War, Ted braved gunfire and gas attacks in France to lead his unit into battle. Yet even after returning home a hero, he was unable to meet the expectations of a public that wanted a man just like his father. A diplomat, writer, and man of great adventure, Ted remained frustrated by his lack of success in the world of politics, witnessing instead the rise of his cousin, Franklin, to the office that had once seemed his for the taking. Then, with World War II looming, Ted reenlisted. In his mid-fifties with a gimpy leg and a heart condition, he was well past his prime, but his insistence to be in the thick of combat proved a vital asset. Paired with the irascible Terry de la Mesa Allen Sr., Ted soon distinguished himself as a front-line general in a campaign that often brought him into conflict with another hard fighter, George Patton. On D-Day, Ted became the oldest soldier and the only general in the Allied forces to storm the beach in the first wave, hobbling across the sand with his cane in one hand and a pistol in the other. His valor and leadership on Utah Beach became the stuff of legends-and earned him the Medal of Honor. His Father's Son delves into the life of a man as courageous, colorful, and unwavering as any of the Roosevelt clan, and offers up a definitive portrait of one of America's greatest military heroes.

His Father's Son: The Life of General Ted Roosevelt, Jr.