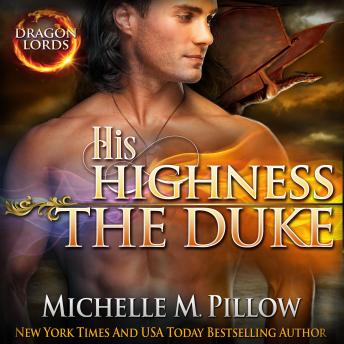 His Highness The Duke: A Qurilixen World Novel

The would-be heroine...
Aeron wants nothing more than to live out her very long, solitary life in a small metal room listening to communications for the Federation Military. It's not glamorous. It's not even charming. But it's safe and there's no chance of getting hurt.

When she intercepts a communication about an impending attack on the Qurilixian people, she has no choice but to act. No one at the Federation seems inclined to do anything and it's up to her to save them. Desperate, she enlists the help of her degenerate sister, whose only solution is to trick Aeron into signing up as a prospective bride to the very alpha male aliens she's trying to rescue.

The man who did not need saved...
Dragon-shifter nobleman Lord Bron, is not looking forward to his seventh failed attempt at a marriage ceremony. But when he sees the lovely Aeron he knows his years of waiting have finally paid off. The gods have blessed him with a life mate...

His new bride is insistent she's not there for marriage, but for a mission. Dragon shifters mate for life and it's up to Bron to convince her they are fated mates, or he'll risk spending the rest of his days alone.

5 Stars! 'I loved all four Dragon Princes books by Michelle M. Pillow so I was so excited to read about their royal cousins. This first book in the series did not disappoint, I loved it. The royal cousins are as hot as the princes!'

His Highness The Duke: A Qurilixen World Novel

This title is due for release on December 15, 2014
We'll send you an email as soon as it is available!