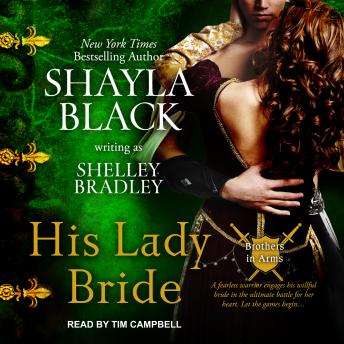 #1 of Brothers in Arms

He was a legend on the battlefield, but Aric Neville, known throughout England as the White Lion, had had his fill of intrigue and bloodshed. So he threw down his sword and walked away, to live a solitary life, cultivating a reputation as a sorcerer. But his prized tranquility was shattered when the villagers brought him a bride. Gwenyth de Auburd was a raven-haired beauty too impudent to ignore and too tempting to resist. When the war raging around them sucked Aric into his past again, he also fought a losing battle against his undeniable desire for the luscious, willful maiden . . . only to learn that he had come to cherish as his wife.

The book was a good listen. Not my favorite black book.

The beginning of the books drags on a little if you aren't familiar with the history of England but one the picture is painted the book gets much better. It's a great story and is recommended. The narrator is very good as well.

This book does a good job of blending the historical intrigue, romantic storyline and hotter scenes at the right pace.

Great book! Made for people that loves history and intrigue. I only wish have a real guy as Aric. Yeah I know, just a dream. The narrator did a great job, once you get used to the voice, you will enjoy it.