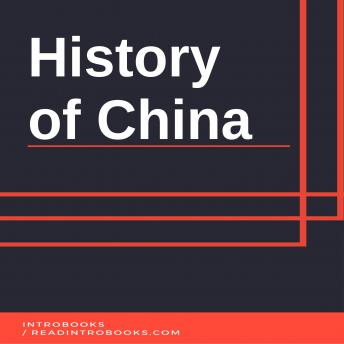 In the present time, china is one of the most developed countries in Asia and the world as well. It has gone through a very long phase to be capable of calling itself a super power. Journey of china is thousands of years old. Before the existence of Xia dynasty, china was nothing as a united empire. Most parts of the modern china were ruled by different emperors. It was Xia dynasty, who took the job of uniting various parts of and forming a huge empire. In their period, china was considered one of the most gigantic empires in the world. However, it was nothing compared to modern china. In the ruling periods of Ming and Qing dynasty, modern china was started to take shape.

History of china is too long and too descriptive to be entirely included in this short book. However, various important parts are included. History of China is often presented in four major parts. First on is the prehistory. Prehistory describes the period, when china was not unified as a single empire. Various parts surrounding modern Beijing were ruled by multiple independent emperors. In 2100 BC, these parts were conquered by Xia dynasty and empire of china was formed. That indicated the journey of china begun in 2100 BC. Including modern republic of china and People's Republic of china, china was ruled by more than 20 different dynasties and kingdoms listed below: