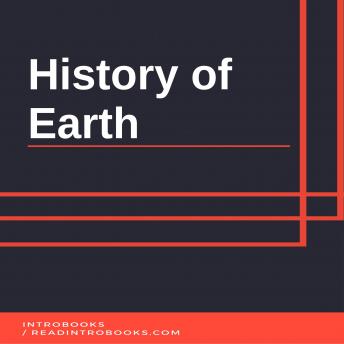 The history of the Earth to be very precise, is concerned with the evolution and development of the planet Earth in the Solar System. It also refers to the series of events and periods that paved the way to the evolution of life on Earth. All branches of Science from the ancient times to the modern times have made their significant contribution to understanding the main events of the Earth from its past to the present. The age of the planet Earth can be deduced to be around one-third of the age of the entire universe. Several events related to the geological changes have occurred in the timespan of the origin and evolution of the Earth. These events have been related to the formation of Earth in the Universe due to the various extra-terrestrial events and the emergence of life on Earth. We would discuss the process of the formation of the planet Earth and the subsequent advent of life for the first time on Earth.


The geological changes occurring on the planet have been a characteristic behavior of the Earth's crust since the primordial times. The geological changes along with the biological changes have been the root cause of the evolution of life on Earth. Since the first evidence of life on Earth, species have continued to flourish and get extinct at the same time. Even the process of the continuous movement of the plate tectonics has played a major role in shaping the continents and the oceans of the Earth's crust. Several changes that occur in the biosphere of the Earth like the ozone layer, the conditions of the different types of soils, the proliferation of the various forms of the greenhouse gases and the events leading to global warming - all of these have played a major role in advancing the primitive Earth to the planet what it has become today.


When considered in the modern phase of the planet Earth, significant changes have been observed in the natural environments since the time of the 1940s. Various forms of developments in the field of technology have caused different kinds of changes to the planet Earth. Man has been able to explore deeper into the Universe and the Solar System with the help of advanced technology. While global warming remains the greatest threat to the existence of the planet Earth, several awareness programs are being developed throughout the world to make our planet a better place to live for the future generations as well. After all - Earth is Our Home!