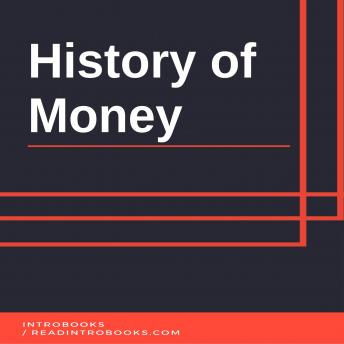 The history of money tells us of the development of the means through which transactions can be carried out with the help of a medium of exchange. From eons now, man has been exchanging goods for a certain price. This price came either in the form of other goods or money. The interesting journey of money from barter products to bitcoin and electronic money covers different ways in which societies and cultures perceived money.


There were a lot of things that were used as a medium of exchange before money made its appearance. These included livestock, vegetables, grains which were useful for the people. But then there were other things like cowrie shells and beads which were used for money solely because they were very attractive. Precious metals and stones were also used as a medium of exchange because of their usefulness and attractiveness.


In the modern world, money has gained a different aspect. It does not require an exchange of produce or commodities, instead, it relies on the exchange of currencies. Money is available today in different forms like currency notes, coins, credit cards, and electronic funds.


In as early as 350 BC, the Greek philosopher Aristotle spoke about the importance of an object for bartering it or selling it. The first official currency is said to be minted in 600 BC in Lydia which is modern day Western Turkey. But there has been evidence that money may have existed before this in various other cultures and cities.


Gradually, the idea of giving monetary value to a relatively insignificant object in order to use it as money became a popular idea. This gave rise to bank notes which are otherwise just a simple piece of paper with no value.


The latest development in the history of money is the introduction of cryptocurrency. Bitcoin is the first successful cryptocurrency. While it is yet to be accepted as a favorable form of money, Bitcoin has its own advantages and disadvantages. There are other crypto currencies which are gradually being introduced as well but their success is yet to be notable.