HITLER: The Man Who Fought the World 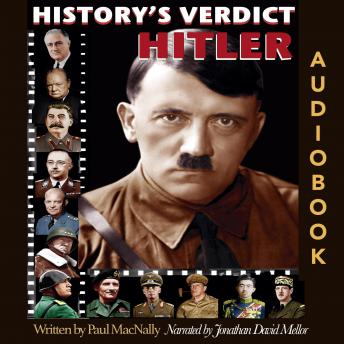 A magnificent script, newly declassified revelations, testimony from the world's greatest historians and thinkers, and the chilling words of the Fuhrer himself and those of his closest henchmen to deliver History’s Verdict on Hitler.

Opening with an astonishing series of insights into the formative years of the future dictator, we trace how the unremarkable son of a provincial bully experienced failure in love and art to then find happiness in the midst of a bloodbath. How Germany's defeat in the Great War catalysed his anti-Semitism and sense of destiny. How his propaganda gurus helped him win vast support in a failed state and pervert it into his Reich. Then how his reeling foreign opponents are struck by his lightning war.

Hitler is measured against other Nazi leaders, his generals and his enemies.

We chart how initial dazzling successes on the battlefields amplify both Hitler's hubris and the horror of his plans.

We see how his fanaticism and his sentimentalism make him a disastrous ally. And how an awesome coalition forms against him.

Stalin’s own contributions to the decisive battles of the eastern Front – Moscow, Stalingrad and Kursk – are analysed, as well as the role of Zhukov, the weather and Siberian troops in saving the U.S.S.R.

HITLER: The Man Who Fought the World

This title is due for release on December 16, 2020
We'll send you an email as soon as it is available!