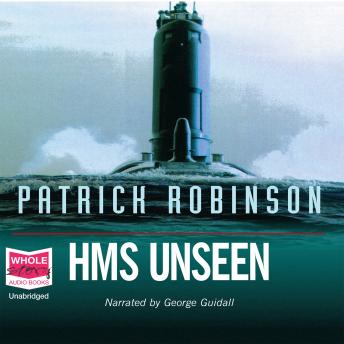 Patrick Robinson burst on the scene with his gripping naval technothriller, the New York Times best-selling Nimitz Class, then did it again with Kilo Class. His explosive HMS Unseen portrays the world in crisis as a dangerous terrorist pits nation against nation to promote his own chilling agenda.

While on a training mission, the British submarine HMS Unseen mysteriously disappears. A year later three planes are shot from the sky - one of them carrying the Vice President of the United States. As wily US Security Advisor Arnold Morgan scrambles to prevent international turmoil, he suspects the lost sub has been modified to carry anti-aircraft weapons. Morgan knows only one person who could mastermind this scheme - an Iraqi terrorist believed to be dead.

Acclaimed on both sides of the Atlantic, Patrick Robinson blows readers out of the water with his adrenaline-charged tales. Veteran narrator George Guidall will keep you gasping for breath as the plot races from the shocking opening to the stunning finish.