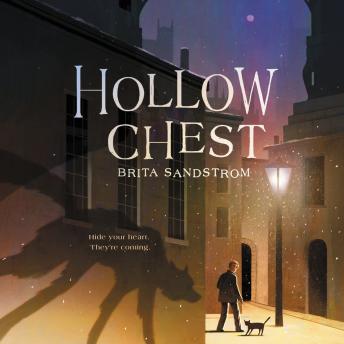 Debut author Brita Sandstrom arrives with an unforgettable modern folktale of the darkness around and inside us, and the courage it takes to keep hope alive.

“Hollow Chest is remarkable on so many levels—its exquisite writing, its startling originality, its deep empathy. An astonishing debut.” —Anne Ursu, award-winning author of The Lost Girl

Charlie has been having nightmares. Eyes watching him in the night, claws on his chest, holding him down. His dreams have been haunted for years, ever since German bombs rained down on London, taking his father’s life, taking his city’s spirit, taking his beloved brother, Theo, off to war in France.

Now Charlie is left to take care of his grandpa Fitz while his mother works, waiting for the day when Theo will come home. And with World War II nearly won, that day is almost here. Grandpa Fitz warns Charlie that soldiers sometimes come back missing a piece of themselves, but Charlie isn’t worried. Whatever Theo has lost, Charlie will help him find it.

When Theo finally does return, though, he is cold and distant. But Charlie refuses to accept that the brother he knew is gone, and soon, he discovers the reason for his brother’s change: war wolves. Terrifying ancient beasts who consume the hearts of those broken by grief.

The wolves have followed soldiers back home from the front. And if Charlie truly wants to save Theo, he’s going to have to find them and get his brother’s heart back. But can a heart that’s been eaten ever be replaced?