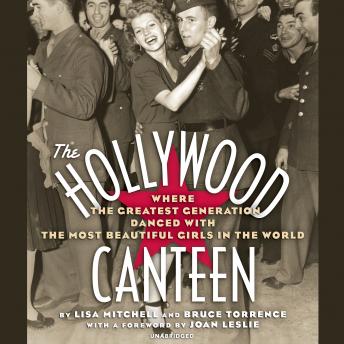 The Hollywood Canteen: Where the Greatest Generation Danced with the Most Beautiful Girls in the World

The Hollywood Canteen was the jewel in the crown of World War II Hollywood. From 1942 to 1945, over three million servicemen came through its doors on their way to fight in the Pacific—some never to return. There, in a converted barn in the heart of Hollywood, soldiers were fed, entertained by, and danced with some of the biggest stars in the world. The Canteen was free to all servicemen or women, regardless of race, inviting them to jive to the music of Kay Kyser and Harry James, laugh at Bob Hope’s jokes, be handed sandwiches by Rita Hayworth, or dance with Hedy Lamarr. Knowing they were so appreciated, the soldiers were armed with the kinds of hope and encouragement that would help them win a war. The Hollywood Canteen: Where the Greatest Generation Danced with the Most Beautiful Girls in the World is the only complete history of the Canteen.

Hollywood Canteen: Where the Greatest Generation Danced with the Most Beautiful Girls in the World

This title is due for release on September 4, 2020
We'll send you an email as soon as it is available!