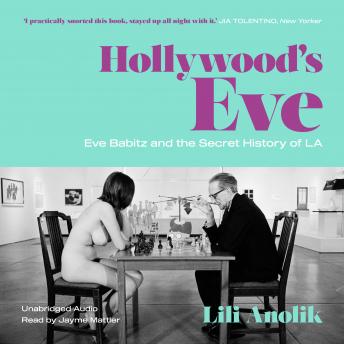 Hollywood's Eve: Eve Babitz and the Secret History of L.A.

The goddaughter of Igor Stravinsky and a graduate of Hollywood High, Eve Babitz posed in 1963, at age twenty, playing chess with the French artist Marcel Duchamp. She was naked; he was not. The photograph made her an instant icon of art and sex. Babitz spent the rest of the decade rocking and rolling on the Sunset Strip, honing her notoriety. There were the album covers she designed: for Buffalo Springfield and the Byrds, to name but a few. There were the men she seduced: Jim Morrison, Ed Ruscha, Harrison Ford, to name but a very few.

Then, at nearly thirty, her It girl days numbered, Babitz was discovered—as a writer—by Joan Didion. She would go on to produce seven books, usually billed as novels or short story collections, always autobiographies and confessionals. Under-known and under-read during her career, she’s since experienced a breakthrough. Now in her mid-seventies, she’s on the cusp of literary stardom and recognition as an essential—as the essential—LA writer. Her prose achieves that American ideal: art that stays loose, maintains its cool, and is so simply enjoyable as to be mistaken for simple entertainment.

What Hollywood’s Eve has going for it on every page is its subject’s utter refusal to be dull… It sends you racing to read the work of Eve Babitz.” The New York Times

“Read Lili Anolik’s book in the same spirit you’d read a new Eve Babitz, if there was one: for the gossip and for the writing. Both are extraordinary.” Jonathan Lethem

“There's no better way to look at Hollywood in that magic decade, the 1970s, than through Eve Babitz's eyes. Eve knew everyone, slept with everyone, used, amused, and abused everyone. And then there's Eve herself: a cult figure turned into a legend in Anolik's electrifying book. This is a portrait as mysterious, maddening-and seductive-as its subject.” —Peter Biskind, author of Easy Riders, Raging Bulls

For Babitz, life was slow days, fast company until a freak fire turned her into a recluse, living in a condo in West Hollywood, where author Lili Anolik tracked her down in 2012. Hollywood’s Eve, equal parts biography and detective story “brings a ludicrously glamorous scene back to life, adding a few shadows along the way” (Vogue) and “sends you racing to read the work of Eve Babitz” (The New York Times).

Hollywood's Eve: Eve Babitz and the Secret History of L.A.