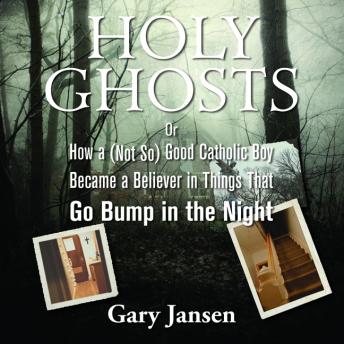 IN THIS EXTRAORDINARY TRUE STORY, the haunting of a Long Island household forces a respected writer and editor to reevaluate the mysteries of life and death as he struggles with the frightening truths of his childhood home and his town's past.

Growing up in Rockville Centre, Long Island, Gary Jansen never believed in ghosts. His mother-a devoutly Catholic woman with a keen sense for the uncanny-claimed that their family house was haunted. But Jansen never found anything inexplicable in how their doorbell would sometimes ring of its own accord; or in the mysterious sounds of footsteps or breaking glass that occasionally would fill their home; or even in his mother's sometimes unnervingly accurate visions of future events and tragedies. Though he once experienced a supernatural encounter in a Prague church as a young man, Jansen grew up into a rationalist, as well as a noted writer and editor.

In 2001, Jansen moved back into the very same house where he had once grown up, to raise a family with his wife. In 2007, he encountered a frightening, full blown haunting in his home. This became the first step of a phenomenon that lasted a full year and eventually included unveiling the identities of the spirits who occupied his house, reliving a tragic murder in his hometown, encountering mind-boggling coincidences between local history and episodes in his household; and finally-with the help of Mary Ann Winkowski, the real-life inspiration for TV's Ghost Whisperer-ridding his house of these uninvited visitors.

Holy Ghosts is not only a gripping true-life ghost story, but a wry and touching memoir, as well as a meditation on the relationship between religion and the paranormal, which are often considered at odds, but which the author shows are intimately linked.