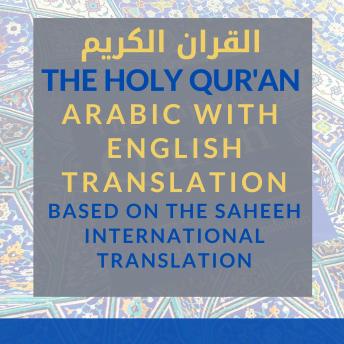 Written By: The Holy Quran

The Qur'an was revealed to the Prophet Muhammad 1400 years ago. It is the supreme authority in Islam and the source of all Islamic teaching; it is a sacred text and a book of guidance that sets out the creed, rituals, ethics, and laws of the Islamic religion. It has been one of the most influential books in the history of literature.

Recognized as the greatest literary masterpiece in Arabic, it has nevertheless remained difficult to understand in its English translations. This is a modern translation that was undertaken by three American women converts to Islam, Emily Assami, Amatullah Bantley and Mary Kennedy.

Orginally produced in 1997, this translation of the Holy Qur'an has received wide acclaim and respect for accurately reflecting Arabic meanings. Simple language and attention to detail have made this a superior English translation

The main objectives that served as guidelines for this translation were:

- To present correct meanings, as far as possible, in accordance with the Aqeedah of Ahl as-Sunnah wal-Jamaah
- To simplify and clarify the language for the benefit of all readers
- To let the Qur’an speak for itself, adding footnotes only where deemed necessary for explanation of points not readily understood or when more than one meaning is acceptable
This production includes the Arabic recitation followed by the translation in English Language.

by The Holy Quran

This title is due for release on July 8, 2020
We'll send you an email as soon as it is available!