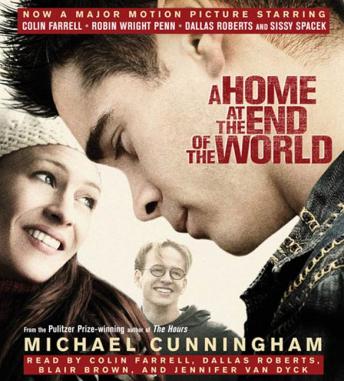 A Home at the End of the World: A Novel

For the first time, an audio production is available of Michael Cunningham's critically acclaimed novel—published to coincide with the release of the feature film starring Colin Farrell and Dallas Roberts
M ichael Cunningham's celebrated novel is the story of two boyhood friends: Jonathan, lonely, introspective, and unsure of himself; and Bobby, hip, dark, and inarticulate. In New York after college, Bobby moves in with Jonathan and his roommate, Clare, a veteran of the city's erotic wars. Bobby and Clare fall in love, scuttling the plans of Jonathan, who is gay, to father Clare's child. Then, when Clare and Bobby have a baby, the three move to a small house upstate to raise 'their' child together and create a new kind of family. A Home at the End of the World masterfully depicts the charged, fragile relationships of urban life today.

Home at the End of the World: A Novel