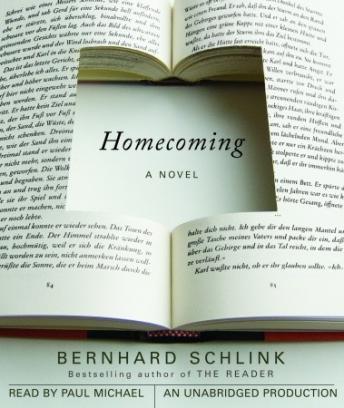 The first novel by Bernhard Schlink since his international best seller The Reader, Homecoming is the story of one man's odyssey and another man's pursuit.

A child of World War II, Peter Debauer grew up with his mother and scant memories of his father, a victim of war. Now an adult, Peter embarks upon a search for the truth surrounding his mother's unwavering--but shaky--history and the possibility of finding his missing father after all these years. The search takes him across Europe, to the United States, and back: finding witnesses, falling in and out of love, chasing fragments of a story and a person who may or may not exist. Within a maze of reinvented identities, Peter pieces together a portrait of a man who uses words as one might use a change of clothing, as he assumes a new guise in any given situation simply to stay alive.

The chase leads Peter to New York City, where he hopes to find the real person behind the disguises. Operating under an assumed identity of his own, Peter unravels the secrets surrounding Columbia University's celebrated political science professor and best-selling author John de Baur, who is known for his incendiary philosophy and the charismatic rapport he has with his students. Terrifying mind games challenge Peter's ability to bring to light the truth surrounding his family history while still holding on to the love of a woman who promises a new life, free of lies and deceit.

Homecoming is a story of fathers and sons, men and women, war and peace. It reveals the humanity that survives the trauma of war and the ongoing possibility for redemption.