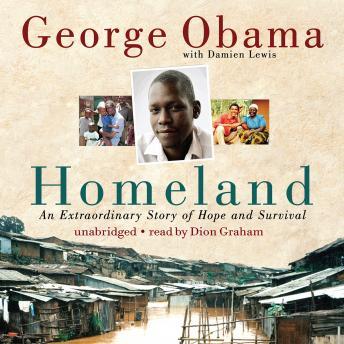 Homeland: An Extraordinary Story of Hope and Survival

In this remarkable memoir, President Obama’s Kenyan half-brother, twenty-seven-year-old George Obama, describes his unique struggles with family, tribe, inheritance, and redemption and the seminal influence his brother had on his own future.

The elusive father that both brothers shared died when George was only six months old. George was raised by his mother and stepfather, but after they separated, he drifted into gangs and petty crime. Restless, willful, and troubled, he lost himself in Nairobi’s vast Mathare ghetto. After being framed for an armed robbery he did not commit and spending time in jail, he represented himself at his trial and won the case. Vowing to turn his life around, he finished his education and set up the George Hussein Obama Homeland Foundation to help street youths overcome the miseries surrounding them.

Homeland: An Extraordinary Story of Hope and Survival