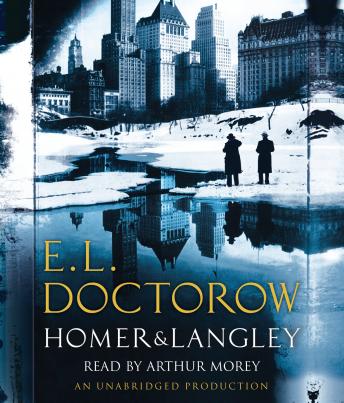 “Beautiful and haunting . . . one of literature’s most unlikely picaresques, a road novel in which the rogue heroes can’t seem to leave home.”—The Boston Globe

SHORTLISTED FOR THE MAN BOOKER INTERNATIONAL PRIZE • NAMED ONE OF THE BEST BOOKS OF THE YEAR BY San Francisco Chronicle • Chicago Tribune • St. Louis Post-Dispatch • The Kansas City Star • Booklist

Homer and Langley Collyer are brothers—the one blind and deeply intuitive, the other damaged into madness, or perhaps greatness, by mustard gas in the Great War. They live as recluses in their once grand Fifth Avenue mansion, scavenging the city streets for things they think they can use, hoarding the daily newspapers as research for Langley’s proposed dateless newspaper whose reportage will be as prophecy. Yet the epic events of the century play out in the lives of the two brothers—wars, political movements, technological advances—and even though they want nothing more than to shut out the world, history seems to pass through their cluttered house in the persons of immigrants, prostitutes, society women, government agents, gangsters, jazz musicians . . . and their housebound lives are fraught with odyssean peril as they struggle to survive and create meaning for themselves.

“Doctorow paints on a sweeping historical canvas, imagining the Collyer brothers as witness to the aspirations and transgressions of 20th century America; yet this book’s most powerfully moving moments are the quiet ones, when the brothers relish a breath of cool morning air, and each other’s tragically exclusive company.”— O: The Oprah Magazine

“A stately, beautiful performance with great resonance . . . What makes this novel so striking is that it joins both blindness and insight, the sensual world and the world of the mind, to tell a story about the unfolding of modern American life that we have never heard in exactly this (austere and lovely) way before.”—San Francisco Chronicle

“Cunningly panoramic . . . Doctorow has packed this tale with episodes of existential wonder that cpature the brothers in all their fascinating wackiness.”—Elle