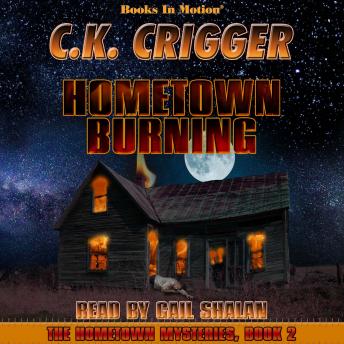 In the second of the Hometown trilogy, ex-Afghanistan vet paramedic Frankie McGill and resident deputy Gabe Zantos are caught up in a case of arson. A house at the end of a country road has stood vacant for years; it's occupants mice and the stray raccoon or two. When the derelict house catches fire, the only reason the Hawkesford Fire Department responds is because of the danger to the dry wheat fields surrounding it. But then not only a gunshot victim, but a charred body is found inside the house, along with evidence of a meth cooking operation. Accident, or murder? While Gabe is delving into this mystery, more trouble is piling up. An elderly man working in his shop is electrocuted in odd circumstances; another elderly man is shot and left to die on his remote farm. Only an unidentified call to the Hawkesford EMS saves him. A widow woman living alone on her family farm is nearly incinerated in a staged accident, which Frankie foils. Then a young girl where Frankie is the attending paramedic dies of a drug overdose and it appears there could be gang rivalry going on. What ties these things together? Is it the sudden rise in drug activity instigated by the Weddell family? Is it the uber-aggressive real estate agent going around trying to buy up old homestead properties? Could it be the obnoxious, land hungry Strohmeyers; a father and son farm duo with questionable morals? The thing is, Frankie inherited an original homestead from her grandparents, which makes her a target right alongside the old folks. It will take all her strength as she battles for her life when she is ambushed.