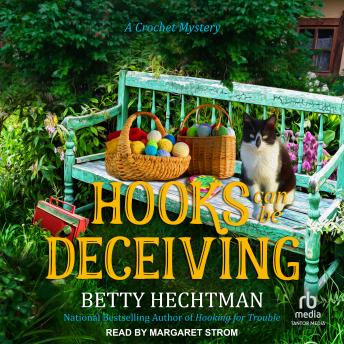 Hooks Can Be Deceiving

Molly Pink's excitement level is off the hook: The Craftee Channel's new cable talk show 'Creating with Crochet' has scheduled an upcoming taping at the bookstore. While she's there, TV host Rory Graham is to work with the Tarzana Hookers on a Make and Take bracelet project to draw bookstore customers to the yarn section. It's a win-win . . . or so it 'seams.'

The situation gets a bit knotted when channel producer Michael Kostner confides to Molly his concern that Rory may have oversold her ability as a crocheter. When the producer's worst fears are realized, it's up to Molly to make sure Rory comes through.

Guiding Rory through crocheting-for-beginners will have to wait, though, as Molly suddenly has to untangle the mysterious death of a new Tarzana Hookers member. Marianne Freeman and her live-in companion, Connie Richards, haven't exactly been gabby since they joined the Hookers, but Connie's voice is silenced permanently when she is electrocuted while walking on a wet lawn-electrified by an old radio plugged into a faulty extension cord. The fingers point at Marianne, but Molly is fast on the case to protect one of her own. Was Marianne the killer . . . or the intended target? Why does her younger brother want to keep her from talking to the cops? And why is this whole case starting to remind Molly Pink of an old TV movie?

This title is due for release on November 29, 2022
We'll send you an email as soon as it is available!