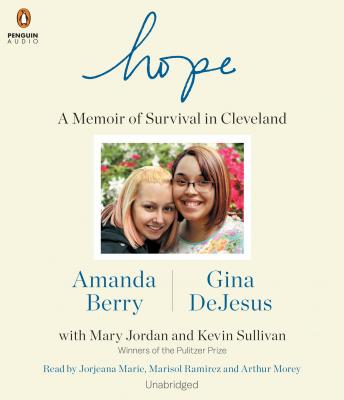 Hope: A Memoir of Survival in Cleveland

Two victims of the infamous Cleveland kidnapper share the story of their abductions, their decade in captivity, and their final, dramatic rescue

On May 6, 2013, Amanda Berry made headlines around the world when she fled a Cleveland area home and called 911, saying: “Help me, I’m Amanda Berry. . . . I’ve been kidnapped, and I’ve been missing for ten years.”

A horrifying story rapidly unfolded. Ariel Castro, a local school bus driver, had separately lured Berry, Gina DeJesus, and Michelle Knight to his home, where he kept them chained in the basement. In the decade that followed, the three were raped, psychologically abused, and threatened with death. Berry bore a child—Jocelyn—by their captor.

Drawing upon their recollections and the diaries they kept, Amanda Berry and Gina DeJesus describe a tale of unimaginable torment, and Pulitzer Prize–winning Washington Post reporters Mary Jordan and Kevin Sullivan interweave the events within Castro’s house with the ongoing efforts to find the missing girls.

The full story behind the headlines—including shocking information never previously released—Hope is a harrowing yet inspiring chronicle of three women whose courage, ingenuity, and resourcefulness ultimately delivered them back to their lives and families.

I've been following these young ladies for a few years. I recommend this and Michelle's (Now Lily Rose) book(s) as well.. Their bravery and resilience is commendable!

This book was brutally honest and shows what strength can be when up against evil. I truly wish that monster would have lived out his live in prison but could only take 33 days of being confined in a cell after all He did to those girls. I pray God will help them find peace and a normal happy life.

Very honest portrayal of an amazing story. I hope our purchase of the book helps the victims in some small way as well. They have already endured so much! Certainly a cautionary tale for young people everywhere. I wish you well as you continue your journey through life. May all your dreams come true.

What an amazing story. Brutally honest from the start, unbelievable in so many ways. What we saw in the news, or what we thought we knew from the movie,....we knew nothing! This real story from the real women who went through this terrible tragedy is the only way to try and grasp what really happened. We will never know your real struggle but I appreciate you sharing your painful story, all girls everywhere should read/hear this. Don't take your kids for granted or think they are safe walking down the road anywhere in this world. Bless you both!

Emotional & touching I pray that all these girls get somewhat of a normal happy life..

Great book! It gave insight into this hideous event. My heart goes out to the victims and what they had to endure.

This book is a must listen. It is so gripping I heard the last 8 hours in a single day. I cried hearing the account of the rescue. Very inspirational it made me be thankful for the little things in life like the sun on your face fresh strawberries and the love of your family. Live Laugh Love is something you should do every day. Live Every Moment Love Every Day Because Before You Know It Your Precious Time Slips Away - REO Speedwagon.