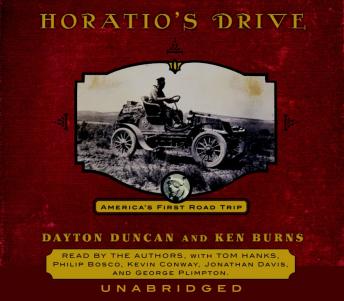 The companion volume to the PBS documentary film about the first—and perhaps most astonishing—automobile trip across the United States.

In 1903 there were only 150 miles of paved roads in the entire nation and most people had never seen a “horseless buggy”—but that did not stop Horatio Nelson Jackson, a thirty-one-year-old Vermont doctor, who impulsively bet fifty dollars that he could drive his 20-horsepower automobile from San Francisco to New York City. Here—in Jackson’s own words and photographs—is a glorious account of that months-long, problem-beset, thrilling-to-the-rattled-bones trip with his mechanic, Sewall Crocker, and a bulldog named Bud. Jackson’s previously unpublished letters to his wife, brimming with optimism against all odds, describe in vivid detail every detour, every flat tire, every adventure good and bad. And his nearly one hundred photographs show a country still settled mainly in small towns, where life moved no faster than the horse-drawn carriage and where the arrival of Jackson’s open-air (roofless and windowless) Winton would cause delirious excitement.

Jackson was possessed of a deep thirst for adventure, and his remarkable story chronicles the very beginning of the restless road trips that soon became a way of life in America. Horatio’s Drive is the first chapter in our nation’s great romance with the road.

With 146 illustrations and 1 map

This title is due for release on July 1, 2003
We'll send you an email as soon as it is available!