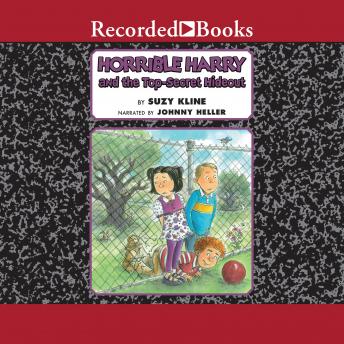 Horrible Harry and the Top-Secret Hideout

A story about appreciating and preserving the environment in your own backyard. Doug thought he knew everything about his best friend, Harry . . . until he discovers that Harry has a secret hideout in the woods just outside of South School.Unfortunately, Harry can't keep his hideout a secret much longer, because the land is going to be sold and turned into a big apartment building-unless he and the rest of the kids in Room 3B can save it. Harry has the idea to turn the lot into a nature center, and his friends want to help after he shows them the beautiful wildflowers, yellow spotted salamanders, and slimy tadpoles. But can Harry persuade the school board to agree, too? Or will his horrible fear come true: losing his hideout forever?

Horrible Harry and the Top-Secret Hideout