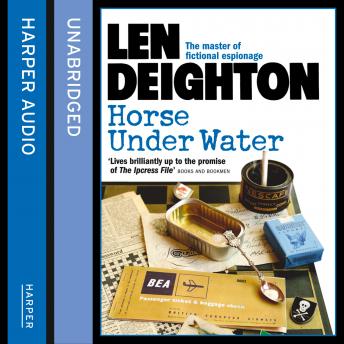 The dead hand of a long-defeated Nazi Third Reich reaches out to Portugal, London and Marrakech in Deighton's second novel, featuring the same anonymous narrator and milieu of The IPCRESS File, but finds Dawlish now head of the secret British Intelligence unit, WOOC(P).

The Ipcress File was a debut sensation. Here in the second Secret File, Horse under Water, skin-diving, drug trafficking and blackmail all feature in a curious story in which the dead hand of a long-defeated Hitler-Germany reaches out to Portugal, London and Marrakech, and to all the neo-Nazis of today's Europe.

The detail is frightening but unfaultable; the story as up to date as ever it was. The un-named hero of The Ipcress File the same: insolent, fallible, capricious - in other words, human. But he must draw on all his abilities, good and bad, when plunged into a story of murder, betrayal and greed every bit as murky as the waters off the coast of Portugal, where the answers lie buried.

It starts out at 5 stars, simply because it’s by Len Deighton, one of the 20th C’s greatest writers. This one is a bit “damned by faint praise” by some, relative to Funeral in Berlin and the Samson books, but it’s still head and shoulders above 99% of the Cold War spy field. And then James Layley’s incredible narration— just the right touch of Michael Caine, plus subtle characterizations and accents for a broad cast of Brits and non-Brits and Europeans of one ilk masquerading as nationals of another land…MASTERFUL. Leighton+ Lailey is one of those magical combinations which puts the product far beyond any 5 star category.