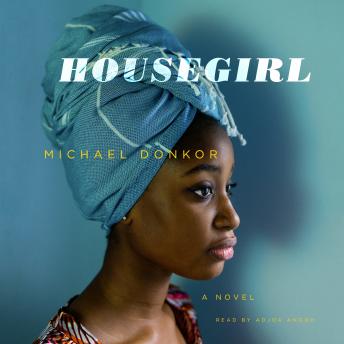 'Adjoa Andoh performs much of Housegirl, Michael Donkor's accomplished, affecting debut novel, in sparkling Ghanaian English, immersing listeners in the world of Ghana and the Ghanaian diaspora.' — BookPage
Nominated for the Edinburgh First Book Award
One of The Millions' 'Most Anticipated Books of the Year'
One of The Guardian's 'Best Summer Books'
A moving and unexpectedly funny exploration of friendship and family, shame and forgiveness, Michael Donkor's debut audiobook follows three adolescent girls grappling with a shared experience: the joys and sorrows of growing up.
Belinda knows how to follow the rules. As a housegirl, she has learned the right way to polish water glasses, to wash and fold a hundred handkerchiefs, and to keep a tight lid on memories of the village she left behind when she came to Kumasi.
Mary is still learning the rules. Eleven-years-old and irrepressible, the young housegirl-in-training is the little sister Belinda never had.
Amma has had enough of the rules. A straight-A student at her exclusive London school, she has always been the pride of her Ghanaian parents—until now. Watching their once-confident teenager grow sullen and wayward, they decide that sensible Belinda is the shining example Amma needs.
So Belinda must leave Mary behind as she is summoned from Ghana to London, where she tries to impose order on her unsettling new world. As summer turns to autumn, Belinda and Amma are surprised to discover common ground. But when the cracks in their defenses open up, the secrets they have both been holding tightly threaten to seep out.
Praise for Housegirl:
'[Narrator Adjoa Andoh's] creativity especially shines...This is an expertly told story of three interwoven lives.' — AudioFile Magazine
“Donkor’s dense descriptions of life in Ghana and London capture the dazzling disorientation of a young village girl on her own. Compelling female characters abound' - Library Journal, starred review