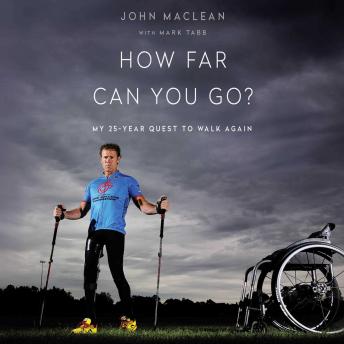 How Far Can You Go: My 25-year quest to walk again

Walking on the beach and holding hands with a loved one is a dream taken for granted by most. But when aspiring athlete John Maclean was struck down by a truck while training for a triathlon at the age of 22, this dream became impossible. John survived, but was left paraplegic – catastrophic for a life so full of promise. He insisted that he’d walk again, but it became clear John would need to shift his focus, and take his beloved father’s words to heart: ‘How far can you go?’

With fierce tenacity, determination, and the love of family and friends, John became one of the most accomplished wheelchair athletes in the world, the first wheelchair athlete to complete the Ironman World Championships and the first paraplegic to swim the English Channel. He also competed in the Sydney Olympics wheelchair demonstration race and in two Paralympic Games in two different disciplines, winning a silver medal for rowing in Beijing.

But John still longed to walk, hand in hand, on the beach with his wife. It wasn’t until he discovered a radical therapy that John was able to reach his full potential by retraining his mind and body to unlock new neural responses . . . and stand, walk, and fulfill his dream.

How Far Can You Go? is John Maclean’s amazing story, and his quest to walk again after 25 years in a wheelchair.

How Far Can You Go: My 25-year quest to walk again