How Hard Can It Be?: A Novel 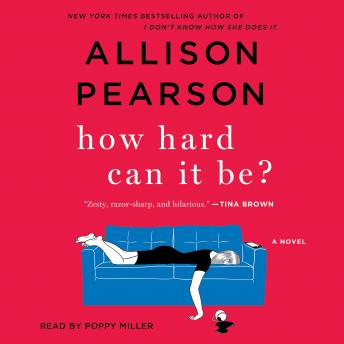 From the New York Times bestselling author of I Don't Know How She Does It comes an audiobook about starting over, and facing life with a sense of humor.

This program is read by acclaimed actor Poppy Miller, who stars as Ginny Weasley in the Broadway production of Harry Potter and the Cursed Child.

Allison Pearson's brilliant debut novel, I Don't Know How She Does It, was a New York Times bestseller with four million copies sold around the world. Called 'the definitive social comedy of working motherhood' (The Washington Post) and 'a hysterical look—in both the laughing and crying senses of the world—at the life of Supermom' (The New York Times), I Don't Know How She Does It introduced Kate Reddy, a woman as sharp as she was funny. As Oprah Winfrey put it, Kate's story became 'the national anthem for working mothers.'

Seven years later, Kate Reddy is facing her 50th birthday. Her children have turned into impossible teenagers; her mother and in-laws are in precarious health; and her husband is having a midlife crisis that leaves her desperate to restart her career after years away from the workplace. Once again, Kate is scrambling to keep all the balls in the air in a juggling act that an early review from the U.K. Express hailed as 'sparkling, funny, and poignant...a triumphant return for Pearson.'

Will Kate reclaim her rightful place at the very hedge fund she founded, or will she strangle in her new “shaping” underwear? Will she rekindle an old flame, or will her house burn to the ground when a rowdy mob shows up for her daughter’s surprise (to her parents) Christmas party? Surely it will all work out in the end. After all, how hard can it be?

Praise for How Hard Can It Be?:

'Written with Allison’s trademark wit and lacerating insight, How Hard Can It Be? is an honest, hilarious look at being a woman of a certain age. Anyone who, like me, adored Kate Reddy in I Don’t Know How She Does It, will be delighted to revisit her fierce and honest take on the figurative and literal bumpy bits of middle age. This book is smart and sharp and funny, funny, funny.' — Aline Brosh McKenna, screenwriter of The Devil Wears Prada and co-creator of Crazy Ex-Girlfriend

'Few sequels beat the original, but How Hard Can It Be? does so hands down. Kate Reddy's comeback as a pushing-50 'Returner,' re-entering the workforce after a spell on the mommy track, is zesty, razor-sharp, and hilarious...Get ready for Kate!' — Tina Brown

How Hard Can It Be?: A Novel