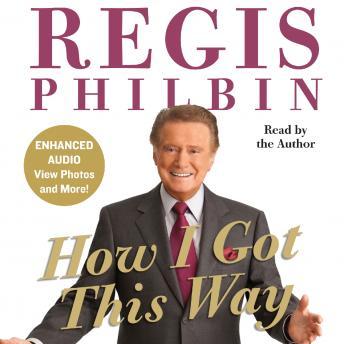 How I Got This Way

One of the most popular television and cultural icons ever, Regis Philbin has been entertaining television audiences for more than fifty years—as a beloved morning-show host (Live with Regis and Kelly), a nighttime game-show host (Who Wants to Be a Millionaire?) and also as a fixture on national and local late-night talk shows. The irrepressible “Reege” has regaled television audiences with his stories for more than half a century, but he’s saved the most hilarious, surprising, heartfelt, and inspiring tales for How I Got This Way. Both a fascinating show business memoir and a delightful primer for living the good life rolled into one, How I Got This Way is Reege being Reege, just the way we love him, as he shares the secrets to success and happiness that he has learned from his innumerable celebrity encounters, his close, personal friendships, and, of course,  his relationship with his loving wife and family.