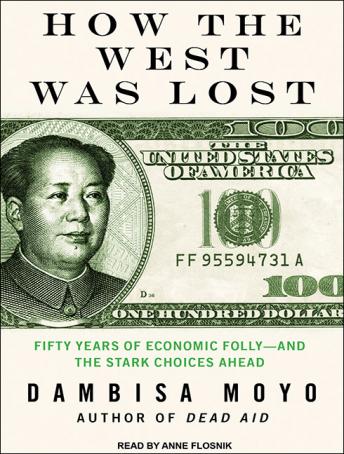 How the West Was Lost: Fifty Years of Economic Folly---and the Stark Choices Ahead

In How the West Was Lost, the New York Times bestselling author Dambisa Moyo offers a bold account of the decline of the economic supremacy of the West. She examines how the West's flawed financial decisions and blinkered political and military choices have resulted in an economic and geopolitical seesaw that is now poised to tip in favor of the emerging world. As Western economies hover on the brink of recession, emerging economies post double-digit growth rates. And whereas in the past, emerging economies lived and died by America's economic performance, now they look to other emerging countries to buy their goods and fuel their success.

Formerly a consultant for the World Bank and an investment banker specializing in emerging markets at Goldman Sachs, Moyo daringly claims that the West can no longer afford to simply regard the up-and-comers as menacing gate-crashers. How the West Was Lost reveals not only the economic myopia of the West but also the radical solutions that it needs to adopt in order to assert itself as a global economic power once again.

How the West Was Lost: Fifty Years of Economic Folly---and the Stark Choices Ahead